I got the idea for this project from a work of art that was displayed at the Capitol for Wisconsin Art Education Association's Youth Art Month Exhibit in 2009 and modified it, adding a bit of my own ideas to create these. They are for our recycling themed art show. 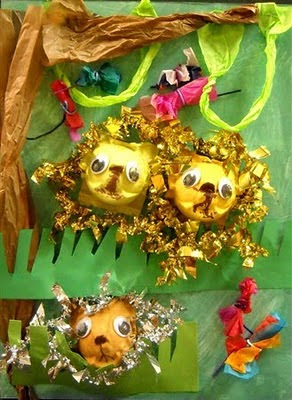 TERMS:
Henri Rousseau: An artist most known for his paintings of jungles. 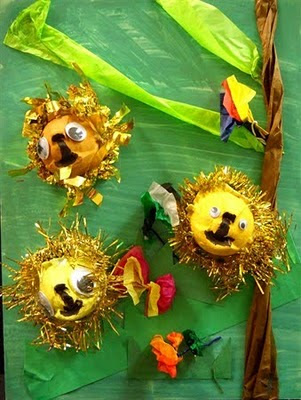 We began with a discussion of paintings by Henri Rousseau. Students noticed how full the images are, and that often, the animals are partialy hidden in the plants. Next, we painted the foamcore board solid green, and the egg cartons any of the "lion colors" that I had poured. Students were asked to have three or four lions in their picture and they put them on a paper plate with their name on it to dry. 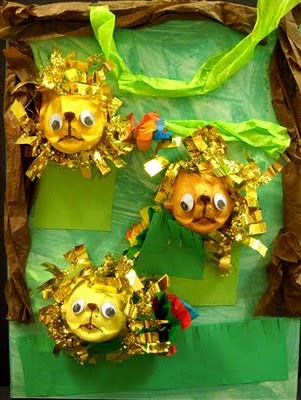 Next class, students used brown or black marker to draw the mouth and nose on the lions and glued them to the foamcore board. Then they worked on making tissue paper flowers. I asked them to have at least three flowers.

During the third class period, they glued eyes on each lion. They were allowed to have different sizes of eyes on different lions, but I told them to make sure that each lion had they same size eyes. I showed them how to cut long triangles out of green paper to make a strip of "grass." They were given the option of having a "tree" in their image, or not, but asked to make sure the whole board looked full. They used strips of tissue paper and twisted them to make the trees, branches, and vines. They glued their trees, vines, flowers, and grass into the picture. 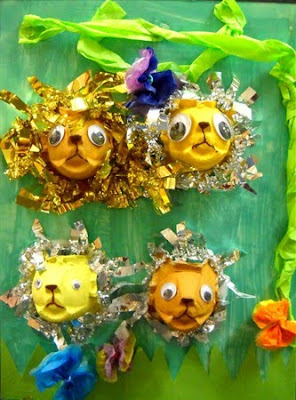 Lastly, Students were given old Christmas garland and they glued it around each of their lions to create a mane. They turned out wonderful!
Posted by Jodi at 1:43 PM

I really like this idea. I think it would be fun for my group to do for International Animal Day!
We are always looking for creative ways to reuse material.